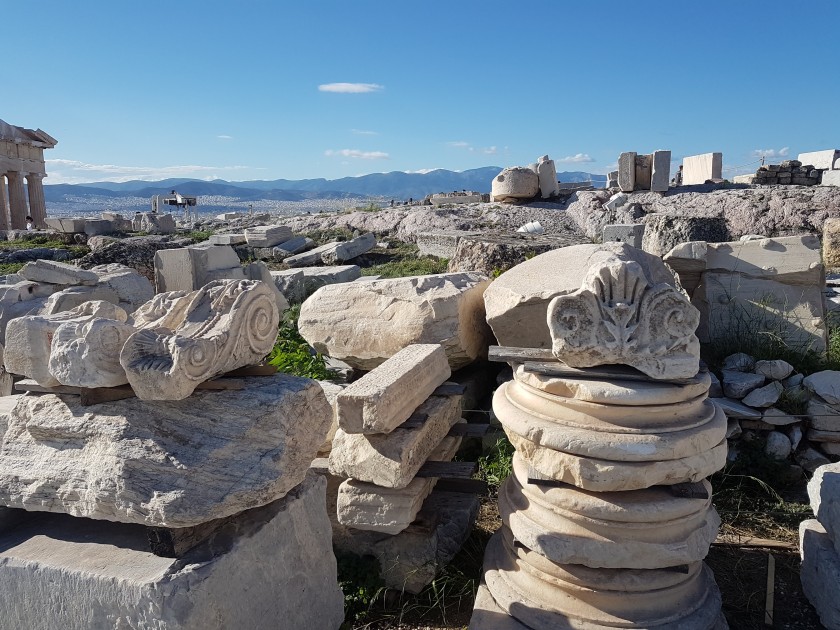 Tell me if you did this.

You’re younger, maybe 5 or 6 or 7 or 8, it’s recess and maybe it’s an overcast day and you’ve got your gray hooded jacket on, a hand-me down probably and you love it. You imagine the gray is the perfect shade for the horse in your next story because that’s what you do, you think up stories all day –

-And then, you stop.

You have a feeling and you turn towards it.

If you can just concentrate hard enough, you know you can look through this wormhole thing that’s sitting just above and in front of you in its bluish plane and you can send your thoughts out to 24-year-old you.

Almost always, it’s 24-year-old you. No idea why that age always sticks out in 6 year-old-you’s mind. But you see through the ether who you will be and what you will have accomplished and where you will have been. And 24-year-old you, sort of body-less and made up of the vapor material of the wormhole, she’ll look back at you and she’ll smile as if she’s been waiting and she’ll tell you everything you ever wanted to know.

You just can’t make out the words.

I was sitting in my Humanities class. Mr. H had the slide-show pictures up, images of previous summer student-trips to the Acropolis flashing across the screen. He was explaining the lay of the land and how everything was built, etc.

And it happened. I stopped listening for a second –

-Because I was there.

I had imagined myself to that tile floor, to those marble columns, and I felt a yearning so deep inside me. I felt, I knew, that someday I would stand on the steps, I would look at this place where civilization and worship and market took place two-plus thousand years ago and I would feel it.

I scoffed at the previous students in Mr. H’s recollections. None of them would have been able to come close to what I would be able to feel once I was standing there.

And technically, I could go there.

That blanched white Acropolis of our textbooks, just a couple plane rides away.

It made me want to cry, this feeling of complete realized clairvoyance. 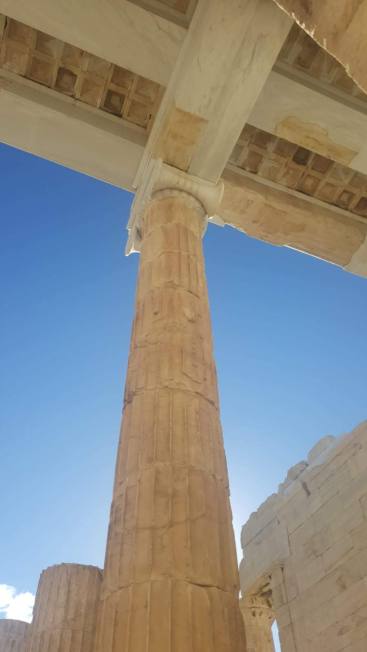 I knew when I walked around the Acropolis, when I beheld the scaffold-ed Parthenon in front of me and the slippery, uneven cobbles below, that I’d be communing with the past.

What I didn’t realize was how close a past I’d be reaching out to.

As Cody and I got ready for our summer trip to Greece and then, months later, finally stood in the hot sun to buy tickets, I was worried.

It had occurred to me that I wouldn’t be able to feel history the way I had as a kid. I was so welltraveled now. I’d been to castles and walked around thousand-year-old archaeological sites since then. I’d visited things and felt the hollowness of not feeling before.

I knew I had been losing that ability to transcend. To time travel.

At 15 years-old, my ability to transcend and feel a different time was a fraction of what I could when I was 5 or 6 or 7 or 8.

That time at my desk looking at my teacher’s pictures of the Acropolis was a rare, powerful force, strong enough to help me broach the impossible with my parents.

“If there was a student trip to Europe, do you think I could go?”

I already figured we didn’t have the money for that kind of thing and I listened to my dad let me down the easiest way possible.

“This seems like a trip you’ll appreciate better when you’re in college,” he said at the family computer desk.

And actually, I wasn’t even asking about Greece since Mr. H swore he’d never take our class because we were too clique-y. Instead, a spring break trip to France and Spain was in the works by another teacher and although the place where Charlemagne reigned was alluring, it was less intoxicating than the idea of seeing the Colosseum in Rome or the Acropolis in Athens.

But despite the let down of knowing I wasn’t going to visit ancient historical sites in Europe that spring, it was a surprising relief to hear my dad said “when.”

He didn’t think it was crazy to dream I’d be walking in those places one day.

And secretly, I was glad I didn’t have to settle for Charlemagne. 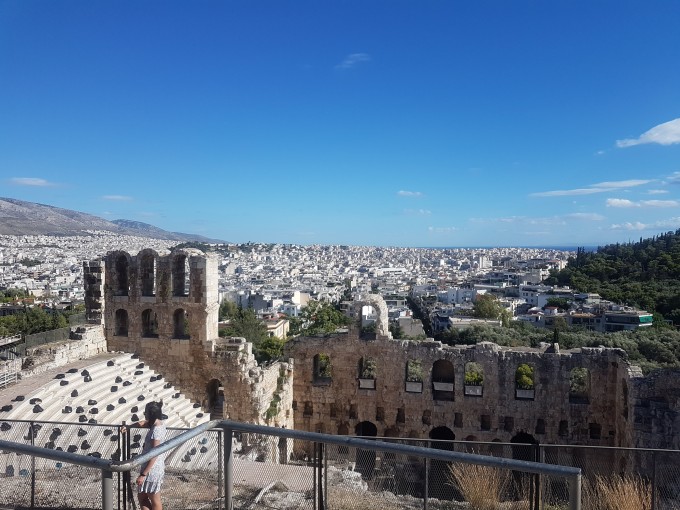 In Athens, Cody, bless him, was doing his best to give me the experience I had been dreaming about since I was a little girl reading Aesop’s fables.

At the Acropolis he was obviously fighting many urges to be grumpy and territorial at the amount of selfie-takers and Instagram-posers stopping in the middle of every clear vista and in front of every building (something 15 year-old-me never would have thought to contend with).

But, double bless him, he was biting his lip and holding his tongue. We discussed the viability of a “camera-free” day at the site, but, for all the minor irritation the picture-posing caused, having the freedom to take photos was for the best. I mean, we were in every other person’s picture that day too, if not just interrupting their unadulterated view.

That’s the nice, cold water slap of realization you have as a tourist. There are no undiscovered parts, no places untraveled, no unique experiences. Everybody is a nuisance to everybody else as they shuffle through the crowd to behold their dream.

For all I know, they were communing with the ancients themselves in a once-in-a-life-time moment. Why didn’t they deserve an Instagram-worthy pose to remember it all by? 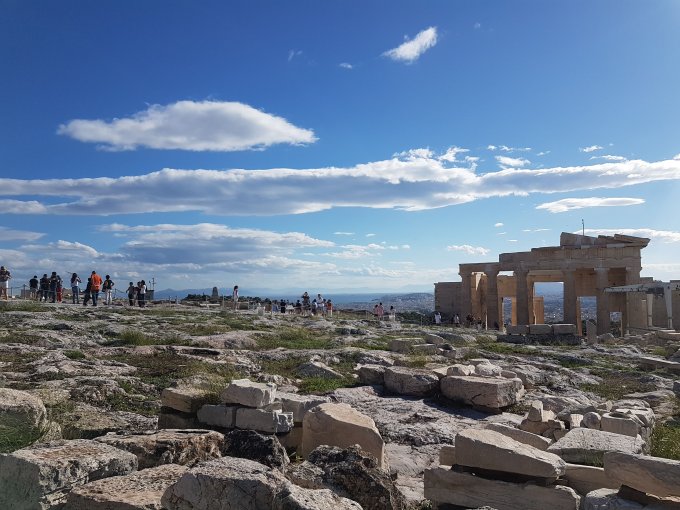 And that‘s the thing I want to focus on right here, right now as I reflect. Because this was a once-in-a-life-time trip for me. I had worried that I’d have trouble connecting to history as I stood before the Agora and the temple and the Caryatids in my adulthood. But actually, that Friday in June 2018, I followed a crack of light through an unexpected door and it took me 15 years back.

That Friday afternoon, I got a pretty good view of a girl in her sophomore year who straightened her hair every morning and sat down 3 or 4 rows from the front. It wasn’t 2,000 years prior, but I time-traveled to see that girl, brimming with all her insecurities and all her unknowns, where she got to sit with her friends in Humanities every day and learn about language and writing and history and dream of going to Greece.

The timing, I see now, couldn’t have been better. 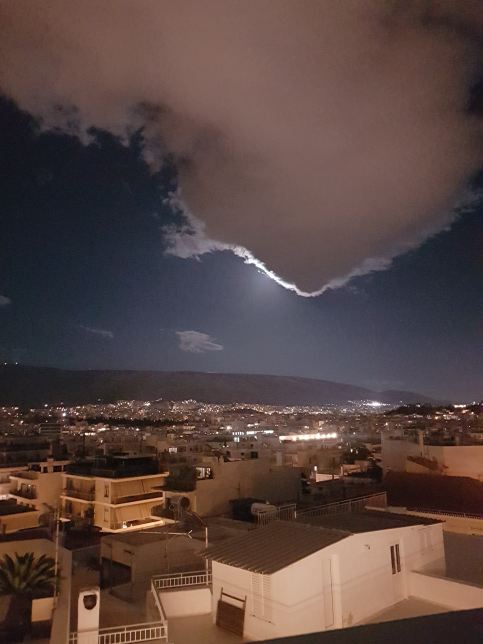 Cody, again, bless him, brought up our conversation from before and said he wished he could get me tickets when no one else was there so I could walk the Acropolis alone and satisfy the lifelong urge to commune with the people in billowy peplos and embroidered trim.

That night, I sort of got that chance.

Our hotel had a surprisingly tremendous view of the acropolis. The sky was a very blue-dark that evening around 10. The moon, full, was the brightest tiniest luminescent coin, framing the dark clouds in white as they passed. The Parthenon, lit up at night, glowed with a soft yellowish lambency.

While I sat, taking in the 2000 year-old view, I streamed an audio book to my phone. I listened to the horrendously campy retelling of all the stories I studied as an 11-year-old in my Greek Mythology class –

– There was Echo, my favorite nymph, whose tragedy was that her voice, the only thing left of her, would always repeat the last thing you said, and there was Persephone, my princess, the child queen of unrealized goddess potential next to her misunderstood king, and there was Calypso in all her loneliness and seduction and power.

There were Others too who I cared less about but understood to be important in the architecture before me… Athena, Poseidon, Apollo, etc.

The rooftop of my hotel was filled with little tables and chairs but remained unlit. A German family played a card game at a table beside me. An older American couple and then an older French couple sat at the little table behind me, taking in the view. A young man walked his baby up and bounced her on his hip as he looked out across the vast plateau.

I thought of Cody down in our room, reading, while James slept in the crib next to the bed.

Every now and then, the strains of a brass band from the theater at the foot of the hill, the Odeon of Herodes Atticus, floated out to the hotel. Occasionally it was loud enough to compete with my earbuds, and I’d pause the audio book to take in the acoustics and think of what I could have been hearing a thousand years ago if I were on a similar roof top, and then what would happen if I were to tumble off the edge of said building back then. It’s unlikely a story involving Hermes or the Zephyr would have been told about me.

The drama of the past is a tricky river to navigate. I wondered next about people dying out on the ocean who’d never get to realize their own Acropolis-type of dream, or shivering on beaches without a home, or being blown up a thousand miles away. That was all happening now, not just then in the stories.

And I wondered next about a country full of people who had been through so much recorded, lauded history, and also through such ruin, catapulted into the next century in a city that had grown too fast for its infrastructure and was trying to find a way to deal with all of the people passing through.

I felt ashamed then of my vacation, as my skin tingled at the edge of the five story drop. I felt the shame of my unrealized research and the weakness and stupidity of not being able to find a solution to any of the world issues that regularly made me weep. And yet here I was taking a break from it all on a ‘once-in-a-life-time’ holiday, comfortable, quiet, relatively unburdened.

So I turned on the audio book again. I decided I’d listen to the rest of this theatrical retelling of Apollo’s latest exploit. And I retreated a little ways back to the place where 15 year-old Jennifer was waiting. I didn’t tell her anything about the life I’d lived thus far or the people in it. I didn’t tell her what was going on in the world around me or my thoughts about it.

Instead, I guess I chose the cowardly thing and I just showed her what was before me: a huge, unimaginable plateau filled with doors, ruins, and temples. It’s everything we dreamed of, I told her, just like you imagined. You did good. You made it. 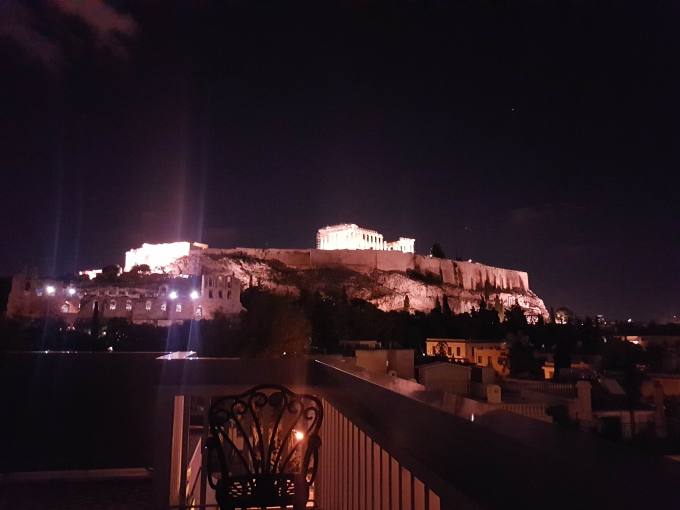