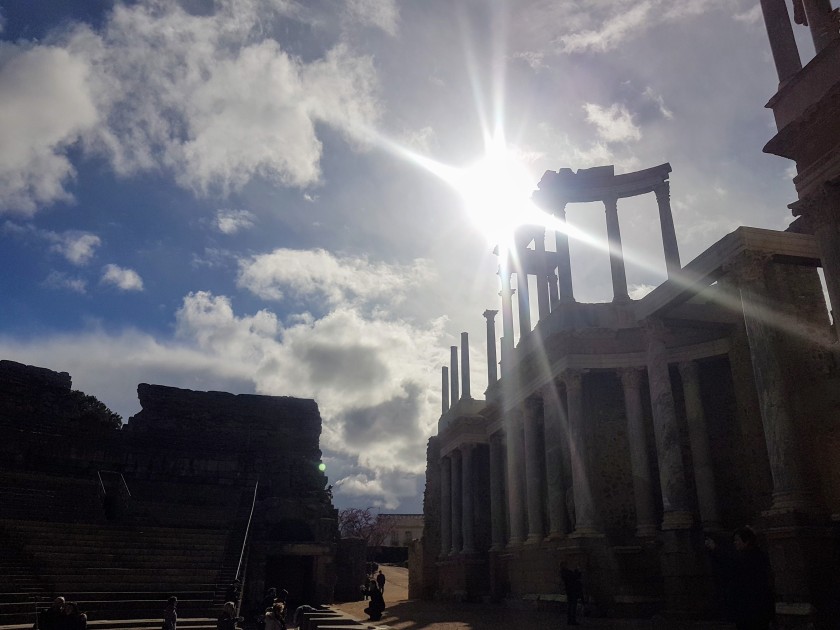 So, with fingers crossed we approached an end-of-March weekend trip to Mérida and Almendralejo, 3 hours north in the landlocked Extremadura region. It turned out to be a weekend of mild weather and was basically sunny, if not a little windy/cold at times (negating my carefully packed wardrobe of skirts and dresses and reminding me I can always make due with three or four items to create enough ‘new’ looks. C’mon Jennifer, pack lighter).

Our choice for the hotel was simple: bought last minute for the end of Semana Santa (Holy Week) it was the only thing within 30 miles available that would allow a dog. We stayed at a roadside hotel just at the extreme edge of Almendralejo and while I don’t think the inconvenience of being placed outside of the main city will be worth a repeat, we loved adding this new experience to our Europe accommodation stays for the following reasons:

No pictures allowed inside the museum, but check out these cool new words we picked up inside:

Nucleacion de burbujas = “Nucleation of bubbles,” my single most favorite expression to learn in any language. It was used in an illustration of the formation of bubbles and foam in a glass of wine, labeling the genesis of the gas bubbles at the bottom of your glass before their quick trajectory to the top. Wine science has been studied to a T.

Barros (the single most difficult word to translate into English for us so far). Between the museum curator’s English dictionary and our translator app’s lack of knowledge, we believe Barro translates roughly to “mud” or “clay,” so the region we were staying in, “Teirra de Barros,” would most closely translate to “Mudlands.” Barro is a very important word to the identity of the region so we’re very interested in knowing for sure. Someone in the know elaborate for us in the comments, por favor.

So many of the reviews on Mérida I saw warn that it’s small, but I don’t see this as a bad thing. It made getting from one historical site to the next very easy. With the up-down walking that comes along hilly streets and a 15 euro ticket, we were able to visit several major Roman archaeological sites over two days . Here’s what we fit into our schedule:

Impressive in its solidness, its lichen covered steps, its easily navigable design, this 2000 year old arena was also set up for Holy Week with a cross made of offering plates across its floor. It was obviously a popular destination, but surprisingly not crowded for this spring-break-time-of-year.

As you walked down one of the main entrances to the floor of the arena, they had life-size cutouts and descriptions of gladiator roles set up beside the stairs, simulating a getting-to-know-you experience with the people who likely would have competed and perished here 2000 years ago. Some might call the life-size illustrations cartoonish, but I think they did the actors a small bit of justice, trying to humanize what we were about to experience.

As I tried to stand in front of each of the cutouts and read the descriptions, I was always getting in the way of some little kid doing the same thing. Except, they were doing a far better job as they gazed for long minutes at the cartoon warrior’s faces, lightly swaying on their toes or dancing out their energy. I tried not to get too nostalgic as I noticed them bringing these characters to life far more effectively than from where I stood in my lofty adulty-ness.

In this literal and figurative passage into the arena, I felt a little pang, a sudden realization that as an adult I had come to master reading the people and the places around me, but had lost much of my ability to embody the story as I once did as a daydreamy little girl. These little kids weren’t lacking self-awareness in taking up all the room in front of the cutouts and causing adults to keep walking down the stairs instead of stopping to read; they were fleshing out a moment. Therefore, no pictures of the stairs with the illustrations. I was already in the kids’ way enough as it was. I hope they each went home afterwards and got to write a story great enough to match what their imagination manifested that day.

Connected by a short path to the anfiteatro, the Grand Teatro is, in a word, beautiful. It’s difficult to imagine this tall structure, complete with columns, stage, statues, and seats, entombed by earth, but it largely was up until 40-ish years ago (barring some restoration license today). It would be amazing to attend Mérida’s classical theatre festival here in August (assuming you could stand the summer heat).

Something else about the Teatro that got me excited (or in Cody’s words: “Nerd Alert”) was this goddess statue flanking one of the main entrances of the theatre.

The onsite sign labeled her as a muse, but I’ve seen other sources identify her as Prosperine, or her mother, Ceres. Prosperine’s Greek version, Persephone, is one of my favorite Greek deities so it was exciting to possibly see her in the flesh/stone somewhere!

I thought a lot of the reviews I read beforehand (caveat: all in English) were sort of unnecessarily negative, saying how it’s only a small site and needed sweeping and that nothing was in English.

Honestly, it was one of my and Cody’s favorite destinations in the last two months of Roman Ruin hopping. I’ve come to realize that I will always be more fascinated by the place people ate and the hearths that they prayed at than where they went to be entertained. As for it not being in English? A minor inconvenience and not terrible if you have a translator app on your smart phone. Plus, looking at the rooms and the mosaics, it’s not hard to use your imagination.

Eh, still mixed feelings about taking pictures of cemeteries, no matter how old. But there are some incredibly well preserved tombstones and sarcophagus, as well as very interesting quotes in Spanish that allowed for more Spanish practice! This was attached to the Casa del Mitreo and was a very easy walk from the site of the house.

We didn’t really get a chance to enjoy much good food in this area, but that may be more our fault than the location’s. Between having a temperamental baby on his own eating schedule and Cody and I getting sick, we moved from place to place quickly and ate in the hotel room. A highlight, then, was Nico Jimenez Taperia y Tiendas in the museum area of Mérida for tapas and beer. We searched it out on the recommendation of a friend (also picking up a bottle of jamón flavored beer for them). The atmosphere was fun and the delicious jamón and specialty pilsner cervesas we got para llevar were worth the excursion, even with a tired baby in tow. 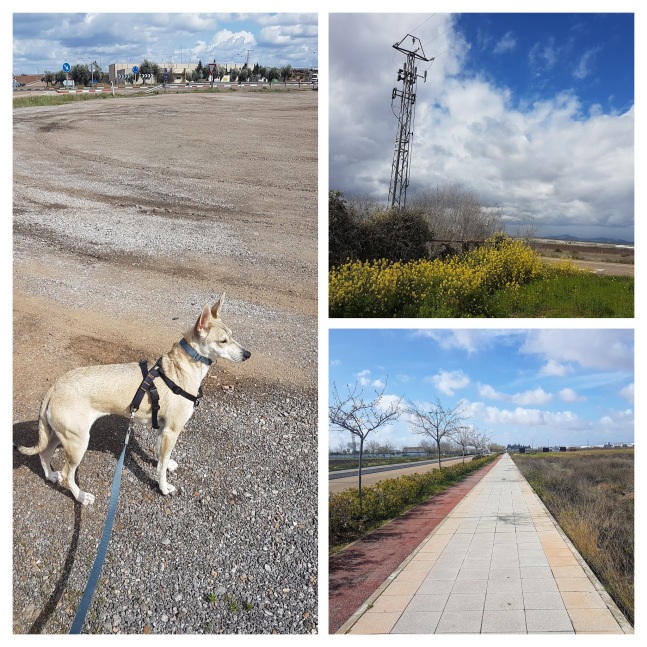 Poor Penny. Part of the downside to staying at a roadside inn meant that it wasn’t feasible to take her with us on our trips into Almendralejo or Mérida because she couldn’t get into any of the museums. So, instead of driving her all the way into Almendralejo or Mérida with us, we peppered her day with many walks around the hotel and up the paved sidewalk-ed highway, affording us views of lonely billboards and delightfully creepy abandoned zoos (which, from reports in the early 2000’s, looks like it was a very good thing it was shut down!).

Bottom line I think we’ll get asked the most: is Mérida worth an overnight trip? My reply will enthusiastically be: yes! If you’re into Roman ruins and history, the area has more to offer than a single day. And as a region, we barely scratched the surface of what Extremadura has to offer in terms of castles, historic sites, and nature reserves. My only suggestion would be to choose a less expensive weekend when accommodation is more available.