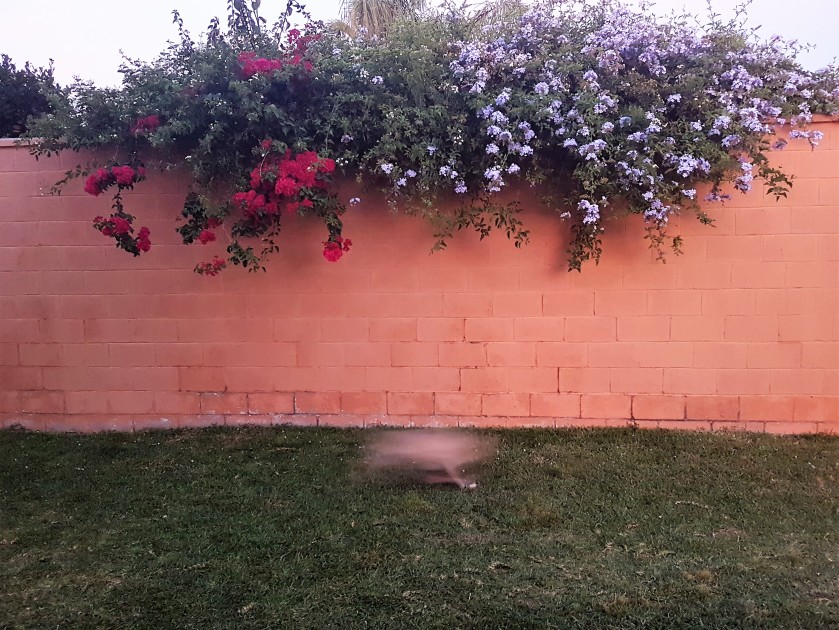 “Pretty impressive in a slipper,” Cody said in all sincerity.

My kick to the soccer ball left it sailing through the air to the other side of our yard.  Our speedy little dog pounced on it the second it landed, triumphant growl and all.

“Thanks,” I smiled back at him.

I flexed my toes in the aforementioned slipper. We were standing in our walled front yard in Spain. It had been a year since we left Hawaiʻi to move here. Cody held our four month old, who teetered in his arms like a baby turkey trying to take flight. They had come out to watch me hang up garments just beyond the shade of the hibiscus.

By now Penny was back with the soccer ball in her mouth, tongue lolling out to the side. I took another swipe at the ball but she dodged me, begging for a chase.

Slipper… Cody’s usage of it hung in the air like a rope cast out to draw me back to a place from which I had drifted.

It had always been a bit of a funny word for me to accept when I was in Hawaiʻi. It never referred to the fuzzy pink house shoes that I was familiar with being worn by old women in cartoons. On the islands, slippers denoted flip-flops, convenience, locality, the daily footwear of everyone.  I wore them every day too.

I wear them in Spain now, but not so much as back then, only around the house and maybe to the beach. No body calls them slippers here. Here, a flip-flop is a flip-flop.

I took another swing at the ball and went back to my laundry. This was a newly learned chore. I’d never been able to line dry anything in Hawaiʻi. I mean, we never had a yard either, but there was always a lanai. And the rule was expressly stated in each rental contract: no hanging laundry from your lanai.

Now, lanai. There was a jewel of a word. We picked up the usage right away because it fit so perfectly into our domain. There was no discussion of whether a thing was a balcony or a deck or a patio or a stoop. It was always, inevitably, perfectly, a lanai.

From Kapo’lei to Pearl City to our Kaneʻohe home to Spain now a year later, the word still glows of reflected sunshine, mugginess, and tasting like a pale lilac breeze through the lili’koi. If I try really hard, I recall that lanais also take on nighttime qualities, like the mellow glow of street lamps, cool moonlit air, the smells of car exhaust and the oiled brown gleam of cockaroaches inevitably lurking upon them.

I remember my first year living on Oʻahu, when I resisted slipper‘s local meaning, but not lanai. It was incongruous. Flip-flops, sandals, how were those ever slippers? Every time I heard it that first year, “Don’t forget to take off your slippers,” I’d take the mental leap from cushiony house shoes to the streamlined rubber thongs everyone wore to the beach and beyond. And then I’d look at my feet and back to the pile of shoes on the lanai in front of the house and I knew I had given myself away.

That moment of hesitation immediately showed me as an other, just as I other the words here in italics to keep my non-Hawaiʻi repertoired audience aware of what I’m signifying. That pause the first year made it obvious that I did not belong in the stratus of various Hawaiʻi residents. It’s what made the Japanese Grad student tell the Michigan Grad student that she didn’t think I understood “their culture” (meaning, not Japanese or American Midwest or even Grad student culture, but the adopted, ubiquitous local culture of living in Hawaiʻi). I had shown up to their Oʻhana house after replying to a Craigslist ad to see about joining them as roommates. The Japanese student had been living in Hawaiʻi for a year and I only a month or so, much too low on the food chain, especially in my obviously ignorant haoleness, to be worth educating, much less living with. I didn’t make the cut.

A year in, I was still a foreigner in Spain, and for obvious reasons: not Spanish, not yet fluent in ordering food or even asking why I didn’t get the sale price on my receipt. But in Hawaiʻi, eventually, I got there, to a place other than “other.”

I mean, I think I got there, in terms of being tolerable. I was in a comfortable place after nearly five years where Hawaiʻi had become my home, even though my presence was complicated and probably obscene to some: a haole married to a haole service member stationed in Hawaiʻi, working on her Masters degree in Second Language Studies.

Living in Hawaiʻi and working on my Master’s was a complicated lesson about living different identities and recognizing different worlds. It was a challenging and beautiful and uncomfortable thing making my home in Hawaiʻi, made all the more sweet and sharp and important by time and distance from it. My place was never going to be solved to my or anyone else’s satisfaction for as long as we lived there, but it was a comfortable if not teetering-on-the-precipice-of-conflict sort of feeling. I made friends in various groups, created acquaintances out of kind encounters, and reflected on what I could do better out of experiences where I knew I was only barely tolerated (and for good reason).

When we moved to Spain, I was sad to leave what felt like home but was also excited that the next step was Europe. I was excited to re-start everything at the same time I tried not to brush off the the last of the humidity of the Koʻolaus or forget the taste of acai bowls from The Health Bar. Still, lanai hung on to my tongue like the beautiful, all encapsulating jewel that it is..so lovely and perfect, denoting some kind of understanding for those in the know, but proving less and less useful in a land where knowing how to translate patio from balcony became necessary in Spanish.

After a year, lanai has almost completely slid away from daily usage. It doesn’t ever materialize in my mind when thinking about the beautiful potted plants I’m attempting to grow on our shaded patio, a luxury I didn’t have the time to try on any of our hot, bare lanais in Hawaiʻi.

And yet, slipper. Why was it growing more and more steadfast in my usage here?

In Hawaiʻi, I had accepted it, encouraged it, even cringed as my dad continued to ignore my “no shoes in the house” rule because it was just so ingrainedly opposite in his mind from his own lived experiences. But despite this all, despite coming to comfortably understand the word “slipper” in the “Mahalo for removing your slippahs” sign outside people’s doors, I always stumbled over using it myself and stubbornly kept up “flip flops” or “sandals” or “shoes” for the five year duration. It’s like I knew that by saying it with sincerity I would be trying to erase that I wasn’t really from there and everyone of course would know that I wasn’t really from there. It was uncomfortable but wholly embraced, this teetering on a precipice of conflict with myself and the place I was calling home.

After a year in Spain, slipper was still inexplicably sidling up to my tongue in every English sentence a flip-flop or sandal may have flopped in conversation in Hawaiʻi. Here in Spain, I’d say “slippers” and then apologizingly reintroduce it as “shoes” when I told other English speakers, “you can leave your slippers on” as they walked through my Spanish door.

Thank god for my friend’s visit last week, where I got to use the word and hear it in the sense I intended it.  But then last night, her last before she left, when a cockroach appeared in our dining room for the first time, I felt a bit like a traitor saying “It must have gotten in from the patio door.”

I doubt she was bothered or noticed. Cody was using the red bug swatter she had gifted us from Longs a year ago, finally coming in handy over here. But as the plastic shattered on our marble floor, maybe she did notice and maybe it reminded her too that we weren’t in Hawaiʻi.

This sea and conflict of alliances were all brewing the next afternoon under that intense Spanish sun one year after moving there, as my husband held our Spanish born baby, an españolito of circumstance cooing like a baby pavo, admiring the soccer ball kick to our Spanish born dog in our sun baked yard, all luxuries of which we couldn’t afford while living on Oʻahu.

“Pretty good kick in a slipper,” my husband had said.

I felt the tug, like a a little thread. I had smiled my thanks to him. But I had also sort of frowned at the word he chose. I reveled in my husband’s compliment, not least of all because he loathes soccer. But he was impressed I had done it in my red leather “slipper.”

It’s absolutely amazing, this locality of language, how home can be found in a word and then…how something so present can just slip away…how you didn’t even watch it go.

Sometimes the things in your life that you cast out to make you a home are less like roots than cords you didn’t know you had tied around your ankle until you feel the tug to turn in their direction.