Cody and I, driven by an almost superstitious need to get the baby through his first flight, were also feeling the high from our successful first train trip to Cordoba. So, we gazed into the ever-seeing glass ball that is the Ryan Air website and came up with direct flights to Bordeaux with very reasonable tickets. Wonderful.

Oh, but by the way, did you know on international flights and most airlines in Europe, babies get charged, even just for a lap seat? Us either. Yeah, there went our superstitious glee.

But you probably came for the trip details, not the pre-trip grumblings, so here is what our two nights, three days in Bordeaux, France with one baby provided:

Day 1 found us walking across the tarmac in Bordeaux and into a room full of sour-faced passengers all corralled into a twisting customs line. I’d like to preface this by saying that Spain has been amazing for babies so far. For example, they have playgrounds at almost every restaurant, clean and well equipped public restrooms at the malls, and people on the street are just generally overjoyed at seeing your baby poking his head out of his stroller. By comparison, this room, mostly full of French passengers, looked at him with shared expressions reminiscent of, “Why would you bring a dog to the Oscars?”

Anyway, I found this important to say because my new found confidence in breast feeding in public took a bit of a nose dive here, though I certainly soldiered on with it, and to make up for that initial unwelcome snub from the French passengers, we were feeling desperate traveling first time internationally with a baby so we cabbed it to our hotel (The thrifty traveler in me never felt so ashamed). I hear there’s a very easy bus situation from the airport to the train station in Bordeaux, so never fear going that route on your visit.

Our room was small and dark but had a teeny tiny kitchenette and sink and a baby-bed for James, so we let him take a nap and munched on the last of our travel food (note to self, this makes like the 20th occasion we’re eating salty-sweet granola bars and beef jerky in a hotel room right after a flight or train. it’s time for new travel snack food). An hour later when baby and husband had woken up, we were all hungry still and, knowing it was nearing closing time, decided to make this our shopping night. So we caught the tram (conveniently located right outside the hotel, inconveniently you had to walk around the fenced parking lot, adding ten minutes and the frustration/adventure of it all) to the large mall not far from our lodging. Our destination? The marvelous French supermarket that would be waiting inside with all the French delicacies I could ever desire. 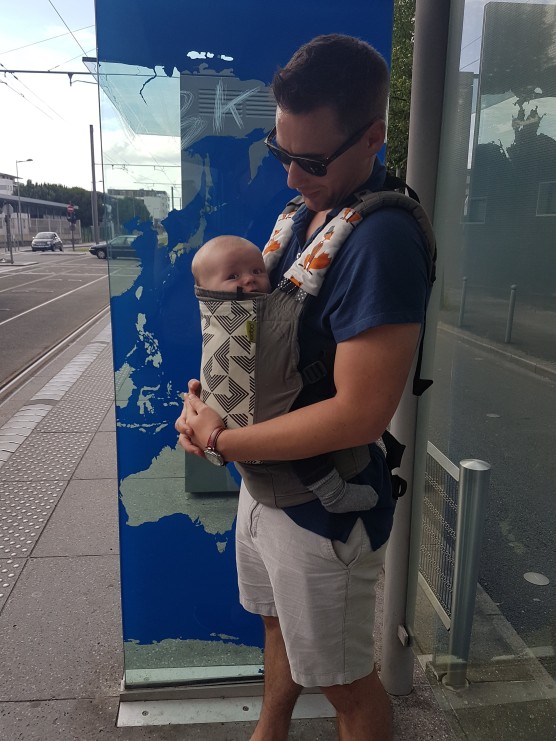 We found the inside of Carrefour insanely busy that day because 1. It was Friday night i.e. the busiest grocery shopping night for Europeans and 2. It was July 1st, first day of the soldes (the bi-annual sales that hit France in January and July). Needless to say, Cody was not loving the situation. But, we acquired a discounted jewel red suitcase to fill with various wines, liquors, speculoos spread, vegetable-derived sponges, diapers for padding, and frozen mini pizzas and then wheeled all of our goods back to the hotel.

The next day after a breakfast of bagged brioche toast and speculoos spread, we took the tram and got off in a tree lined park to wander out underneath a cerulean blue sky. In fact, this lovely blue sky was scattered with so many fluffy white clouds that suddenly they were spilling over our feet and into our walking space. We had found ourselves at the Miroir D’eau, a beautiful looking-glass of a fountain. I made Cody pose for a picture and he kindly obliged, equally as enchanted by the whole cloud sky floor thing. Thus began the one window of sunshine on our cloudy trip that would end with Cody getting a burnt forehead (but, more on that later). 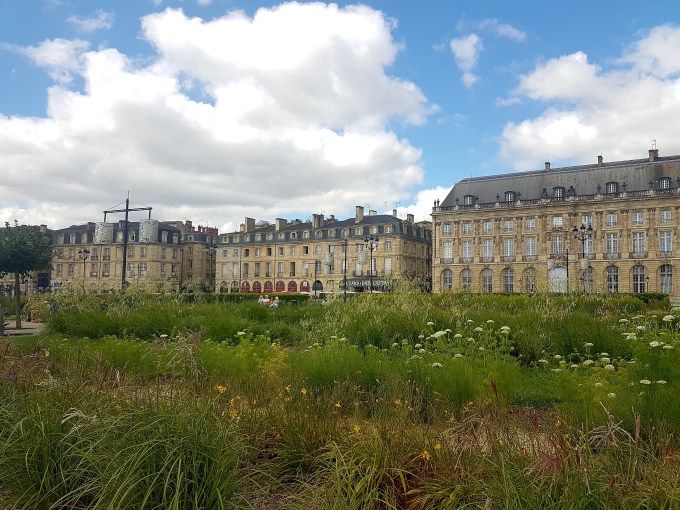 Then we strolled into an accidental musical festival with fun and boldly played gypsy punk and probably only a few people in the audience because of the early hour. Cody, like a stealth fox was gone before I could even ask if we could stay to listen.

GIANT SPEAKERS LITTLE EARS, he replied in shout-whisper when I caught up, indicating the four month old baby attached to his chest. Ouf, c’est la vie I guess.

Then we were walking up a cobbled street with the spires of the Basilica of St Michael as our guide when I was easily distracted by the open maw of the two story antique store, Les Hangars St Michel Brocante Antiquites. We debated and deemed dust safe for little lungs and meandered past the other Sunday perusers. Sliding through tight rows of beautiful giant armoires (bonjour, Narnia, but I can’t afford you) and glass cases lined with charmingly tarnished snuff boxes, I breathed in the musty smell of literal one-man’s-trash-is-another-man’s-treasure-dom.

And then, I saw it, my crown jewel. Two gorgeous moss green marble bookends, one of a day-dreamy philosopher and the other of his fed-up king. I debated lugging them back to Spain in my backpack. Cody was on-board as long as it fit in the super fragile day backpack. But I stalled, worried about being arrested for carrying bludgeoning weapons through airport security (Seriously, they were sturdy enough to be the legs of a coffee table, much less hold up the books. Does anyone know if I’d be allowed to carry them on?) We left so we could “think about it.”

The antique store was closed a couple hours later. This is not an occasion for C’est la vie, I repeat, it is not c’est la vie! Marble bookends, you slipped out of my grasp but I will return for you!

Next, we wandered through a vast antique market the Sunday Flea market at Duburg Square, where old pictures and the people who once treasured them made me feel melancholy and reflective.  As Cody strolled casually past the tables with Jamesy, I made small talk with a vendor at the picture table. English became the language du jour when my French stumbled out too slowly:

First child? That’s why the papa is carrying him, he cajoled.

I smiled, relieved he wasn’t going to try to get me to buy the antique Belgium cigarette case I had just decided not to touch.

Three children? he continued, It’s the mama, always the mama.

We both gave hearty laughs and he bid me a good day and turned to rub elbows with the other vendors.

Our stroll through the antique market was followed up by delicious coffee and thick milkshakes at a little creperie stand not far away. But, unfortunately, that was preceded by the most miserable lunching experience one could have in Bordeaux, even though  delicious cous cous and tangine dishes were served. It involved a sunburnt pate (Cody’s) because of a stolen umbrella by a discourteous waiter (much to our chagrin with the baby and all), an overtaxed kitchen which led to a very slowly served plates, and, finally, a 30 minute wait for the check in which “l’addition s’il vous plait” was uttered meekly and then desperately at least three times). Let’s just focus on how good that milkshake was at the next place. Slurp slurp. 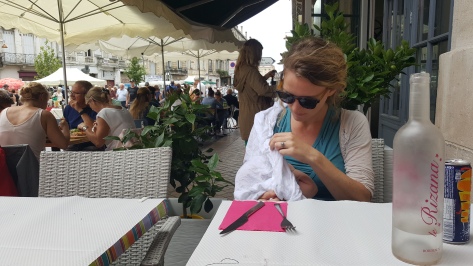 Before the umbrella was stolen.

On the next and final day before we had to catch our flight back to Spain, we met a former and very accomplished student of mine at her favorite cathedral in Bordeaux, Saint-André, and she filled us in on details of her life as well as those of Bordeaux we hadn’t thought to check out.

We learned they had the longest shopping street in Europe (Rue Ste Catherine) which was pretty cool once we took a moment to admire it. Then she took us to a fancy chocolaterie, Maison Georges Larnicol near the Opéra National, where we bought and bought, filling our little paper bags with bonbons as if we were returning somewhere where chocolate was never to be found again. I’d like to add that while paying for this chocolate and in front of my former second-language student I bravely inquired of the salesperson in her first language, “Nous cherchons le Grande Cloche?” and received adequate and willing directions (in French no less! I love it when the answers are gauche-gauche-gauche). 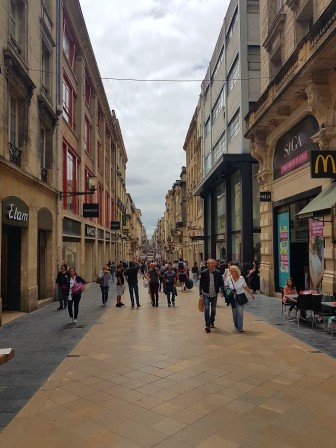 Off to the Grand Cloche we went (impressive, yes) to meet some American friends who happened to be taking advantage of the cheap Ryan Air tickets over the Fourth of July weekend as well. We enthusiastically settled on a ramen restaurant, ready to slurp some good noodles and broth after over a year in our ramenless corner of Spain. But, alas, the most remarkable part of this lunch was perhaps the super refreshing yet unfinished glass of rosé wine I’ve ever encountered, and double alas, will never be able to finish.

And all the while James kept us busy with diaper blowouts and inquisitive stares from strangers. The end.

A few other highlights:

Adieu cher France. It was my first time in Nouveau Aquitaine and if I have my way, certainly not my last. Marble bookends, I WILL see you again.