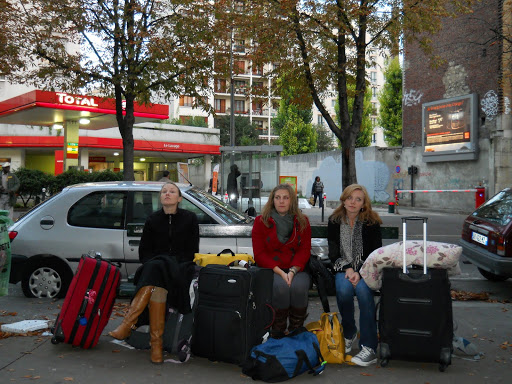 As I sit here munching on my pain au chocolate and dropping crumbs into my keyboard (souvenirs for a later date), the first thing I contemplate is what my parents will be thinking as they read this sentence.

Pfff, if my keyboard can recover from a latte then I think it can survive some measly bread crumbs. What else ya got?

“Our fears are confirmed!”

They had said to me, pleaded really, before I left, “Jennifer, we are concerned about your eating habits and what you call food.  Please eat something besides just bread and sugar while you’re in France.”

Well, be not afraid parents! Am I eating more bread in France than I ever ate in the states? Oui (achieveable? yes!) but try to remember that the two main food groups in France are 1) butter and 2) bread. It’s imperative that I eat these things in order to avoid being beaten out of l’Hexagone with a crusty baguette.

But, in all seriousness, I spent my first five days in Nantes introduced to warm, wholesome meals made by a verified French family.  Every night the Manieres slaved in the kitchen to provide me with sufficient amounts of nourishment to turn any malnourished traveler into a well-fed member of society. I’ve consumed enough protein, calcium, and vitamins to last me through March. Turkey, potage, chicken, potatoes, fish, salad, chocolate cake, savory crepes, prune tarts, greens, etc, etc…every opportunity they had to feed me, they did, and still I’ve managed to fit into my American jeans. Hurrah!

Really, those Manieres spoiled me. What a wonderful introduction to France! I was completely coddled during my first few days here. Sure I was also bombarded with rapid French at every meal and had to share space with the army of spiders in their basement (more on that later), but they ensured that I was completely comfortable and that I had everything I needed when I finally moved out. They also had a very good sense of humor. As I struggled to form complete sentences in the correct tenses, they gently poked fun from across the table in a way that I could realize when I was the butt of the joke and gingerly poke back (sarcasm crosses language barriers BTW). Mme Maniere had a cold when I first arrived and so my favorite quote is her reply to my ensuing sniffles.  “My welcome gift to France,” she smugly replied, en anglais for emphasis. Those sniffles quickly developed into a full blown nasal clogging, energy draining, lung hammering cold. Merci beaucoup Mme. Maniere.

I think the best part about my stay with the Manieres, though, was getting to know them on a personal level. Our mode of verbal communication might have been quite limited, but I got comfortable enough with them that I would forget that they spoke another language until they actually started speaking again. During my first few days in France, when my morale was at its most delicate state, this made France and the people who speak French a little less intimidating.  Par exemple: M. Maniere hates shopping at the huge Wal-mart-ish French super shopping center, kinda like other dads I know, and we were practically galloping through it, gathering items on his grocery list into our arms to save time. Mme Maniere was so pleasant and concerned with my day each time I came home. We even watched ‘Julie and Julia’ in French and she would look up words in their big French/English dictionary for me. Quentin, the teenager, was aloof in a nice way, ready to talk when I tried, and Vincent, the 12 year old, was shy but amusing, and stared at me like I was an alien from outer-space all through my first dinner.

In addition to this charming French family, I’ve also had an encouraging experience with my English teachers.  They’ve all been extremely helpful and patient, some even going out of their way to ensure that I had proper lodging and food. However, sometimes their aide seems a bit misplaced. No matter how much I assure them in French or in English that the other school has taken care of something for me, the teachers will roll their eyes, refuse to trust in the capabilities of the other school, ask “Why must I do everything,” and attempt to completely re-do whatever was done for me by the other school. This makes them helpful in a competitive sort of way, which ends up being completely unhelpful at times. But more on that in another post. Right now, I’m still just focusing on how thankful I am that they are patient with me and so willing to help.

And then there are the students. Sure there were a handful of indifferent ones at the lycée (high school), but at the collège (middle school) alone, I’ve had at least three pairs of arms thrown into the air with celebratory “Yes!“s when I say that I’m American. Just yesterday as I was responding to questions from a room full of twelve-year-olds such as “What is your brothers and sisters?” and “Do you have stars?” (don’t judge,YOU try learning the English language, it’s crazy difficult) one young boy excitedly asked his teacher “Comment dit-on ‘belle’?”  The teacher looked confused and tried to dissuade him with “But Mario, that’s not a question…” But Mario, who looks like that kid in first grade who divides his time between declaring his love for every girl in school and stuffing worms up his nose, ignored Madame’s advice and desperately shouted out above the other questions, “YOU ARE BEAUTIFUL!”

Fortunately, no one remarked on my reddening face because they were either too busy giggling or pointing out Mario’s ensuing blush. The teacher looked flustered, Mario looked horrified, and I was trying to come up with some semblance of an appropriate response amid the roar of kissy noises. However, it all paid off later when I screwed up during an intense game of Simon Says and Mario discretely covered up my mistake. Props, Mario, glad you’ve got my back.

However, amid all of these heartwarming anecdotes, I mustn’t let you think that my whole experience with France has left me entranced. My first couple of days left me quite the opposite.

The first set back? Things are expensive here! Even if the dollar weren’t weaker than the euro, the cost of living is high! 5.5 euros at IKEA for one plain white sheet? Sheesh! 3 euros for a kilo of apples? Eep! But, 1 euro for a baguette that will feed me for two days? Yes please!

The second set back, French administrative paperwork. It is loooong. And endless. And redundant. And boring. Plus, impossible to understand.

Third set back, arguably the worst: my comprehension of the French language is more terrible than I ever imagined. What happened to all of those years of studying vocab, past, present, and perfect tenses in high school and at Eastern? Oh yeah, I discarded all of that ‘irritating’ information as soon as I finished the test. I figured, if I really want to learn, I’ll relearn when I go to France. Holy merde was I being irresponsible.

I really feel like I’ve let that part of my brain die, or at least starved it almost to death over the last year and a half. And to top it off, the icing on the perpetual cake of my demise, my clumsy tongue can’t even form the sounds properly.

Do you know what’s embarrassing? Being hired to teach someone how to speak a different language and then not even coming prepared enough to suitably speak your employer’s language to their face. This was quite honestly the most frustrating set back. Even today, after being in France for close to two weeks, I could barely manage to express myself in the most simplistic terms. I sound like a well-meaning simpleton when I tell them that I’d like to teach French someday.

Comprehension is easier when people are speaking slow and using enough familiar vocabulary. So that’s encouraging. But when I try to speak? It’s as if there’s a wall around that portion of my brain. Or, better yet, I’ve found a door in that wall, but when I open it there’s just a block of cement on the other side.


Let me describe the French language for you. When native French speakers speak, it’s as if a lovely silk tapestry is being spun into the air, complex and rich. Watercolor and textured oil paintings are being painted into existence. Busts of Roman emperors are being created. Masterpieces are being carved from solid rock.

When a foreigner speaks good French it’s like a smooth ice sculpture, not quite as refined as the other products, but equally as lovely to behold, perhaps even more gratifying when you consider how easily it could have been ruined by an unskilled hand.

Now let me describe what happens when I open my mouth: play-dough. Garishly colored, easily misconstrued, and something one usually outgrows after childhood, my French is abysmal and totally embarrassing. Do you know how frustrating this is for someone who spent all of her money on a French Major? Who had to suffer the looks from well-meaning inquiries of, “What will you do with that?”

I want to be constructing ice sculptures! Heck, I’d even settle for ice cubes.

The good news? Baby steps. Everyday I make minor improvements. The play-dough is maleable at least. When it has dried as hard as rocks then I’ll be truly concerned. But until then, I’ve enrolled in a French class, which has been immensly comforting for me. I can speak/understand that level of French!


And I’ve gotten used to sounding like a complete idiot, meaning that it doesn’t sting quite so much every time I mispronounce something basic. At least I must not look like one. I’ve had several people approach me for directions in the street (real French people, I asked!) or questions in the supermarket. These inquiries were of course followed by a mix of horrified or pitying looks as they heard my awkward French.

I then insist that, “Oui, je parle français.”

But they’ve already said their goodbyes with a sympathetic nod, more content to continue wandering around lost than wait as I stumble through my French vocabulary for “left,” “right,” and “far.”